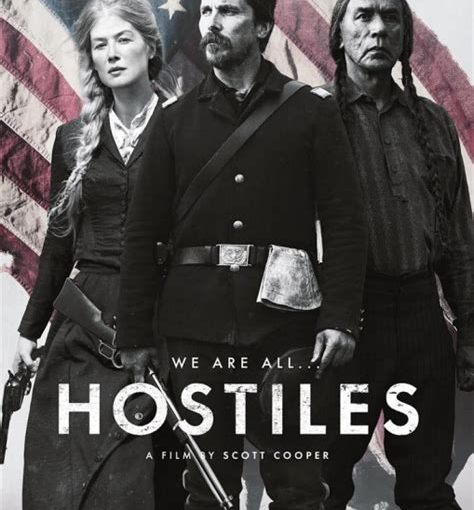 Hostiles takes place in 1892 and follows a well-known and soon to retire army captain: Joseph Blocker, played by Christian Bale. His last orders come from President Harrison himself: to escort a dying Cheyenne chief, played by Wes Studi, and his family to their homeland in Montana. Blocker is a gruff military man, who has a deep hatred for the Native Americans, having fought against them most of his career. Believing that they are all evil savages, and deserve no kindness shown to them, Blocker takes the assignment only because his superior officer threatens him with his pension. Soon after setting out, Blocker and his small unit stumble upon Rosalie Quaid, played by Rosamund Pike, who is the sole survivor after a group of Comanche’s attack her family’s frontier home. The movie depicts the group’s long and treacherous journey to Montana. 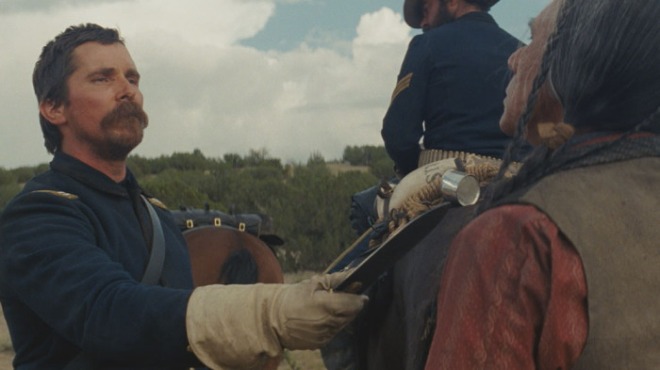 The name of the movie: Hostiles is indeed the difficult subject of the film: that literally everyone is hostile to everyone else, and all sides feel they are right. Soldier, Native American, settler, it doesn’t matter; almost everyone they encounter on their journey is hostile to them.

This is a bleak western, that sets out to show the reality of the time period, as opposed to it being romanticized as the genre usually is. In doing so it is also a brutal movie, that at times is shocking in what it depicts. More than once the story of Hostiles reminded me of the popular 2010 western video game Red Dead Redemption, which also showcased a deconstructed and non-romanticized view of the period. In stark contrast to the death and brutality of the film, the landscapes traveled are also some of the most breathtakingly gorgeous scenery in any modern western. The cinematography is spectacular.

Be aware: this is not a faced paced, action western. There are definitely a couple of those moments, however most of the movie is a slow-burn that centers on the characters, specifically Bale and Pike’s. Both actors deliver fantastic performances, and the best parts of the movie are spent watching how they both change through their journey. Bale feels right at home back in another western; it’s one of the genres where he shines the brightest as an actor.

One of Hostile’s biggest flaws is that after it presents its realistic take of the American west, it doesn’t really do or say anything with it other than “here it is.” The two main character’s arcs come the closest to having any type of response, but since this is a movie that wants you to think about the subject matter, it would have been nice to delve deeper and see more of the inward struggles of the characters. For all of Blocker’s hatred, his journey specifically felt a bit too instantaneous, and would have benefited from more on-screen interaction with Wes Studi’s Chief Yellow Hawk.

Even so, from someone who absolutely loves the western genre; Hostiles is a great addition and a fresh take that seeks to strip away all of the romance, leaving the harsh reality of the period. This will not be a western for everyone, and will not make anyone fall in love with the genre who hasn’t already. However if you are a fan, and are ok with a slower moving story that focuses more on the development of the characters when faced with the bleak circumstances of their situation, then you should check out Hostiles.

One thought on “Hostiles Movie Review: A Brutally Realistic Take on The Western Genre”