Gargantuan news yesterday as AMC unveiled its new movie subscription service they’ll use to compete with their arch nemesis, MoviePass.

AMC has not been shy when it comes to stating how they feel about MoviePass; even threatening to bring a lawsuit against MoviePass to ban them from AMC theaters. “[MoviePass] is not in the best interest of moviegoers, movie theatres and movie studios.”

The two companies even got into an argument over how much of AMC’s ticket sales were attributed to MoviePass subscribers. However, with the unveiling of this new plan, I have a feeling the numbers are higher than AMC wanted to admit.

They even took shots at MoviePass in yesterday’s press release, calling out right at the top that their model featured repeat viewings of the same movie at the “sustainable” price of $19.95 per month.

Now, I don’t plan on switching plans any time soon, however, this is just about the best news movie fans could hope for. Why you ask?

Because this is evidence that what started as a seemingly temporary fad has hopefully changed the movie theater business forever. Even if MoviePass goes belly up, never to be heard from again, the subscription service model they started is here to stay in one form or another: as it should.

With the ever increasing popularity of in-home services like Netflix, Hulu, etc, theaters have been all but helpless to stop the declining theater attendance. I firmly believe that the subscription model is the best solution and the future of movie going.

More and more people have accepted the Netflix monthly subscription model as the standard, while refusing to spend $100+ for a family to go to just one movie. Most theaters really only make a profit on concessions sales anyway. If you can get people in the door by making them feel like they are getting a huge deal on the tickets, they are more likely to drop money on food and drinks more often. I know this is true, because I have to literally stop myself from getting popcorn every time I see a movie with MoviePass (That’s a lie, Michelle is the one who stops me).

The other piece of this news that is good for movie goers, at least long term is the creation of competition. The more companies that offer subscription plans, the more they will all have to fight to be on top by offering the best value possible to the customer. MoviePass is already hurling insults at AMC’s new plan: 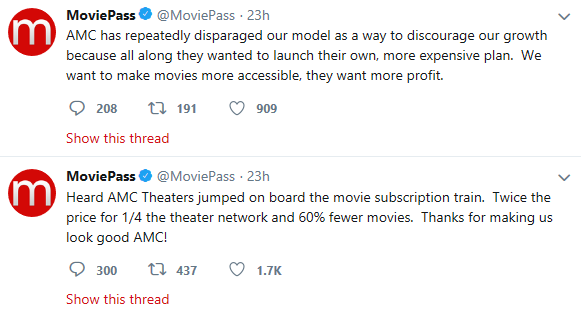 Of course, what actual affect this has on the movie industry remains to be seen. However, it is definitely good news for consumers who enjoy the movie going experience.

3 thoughts on “Why AMC Announcing Their Own Subscription Plan is The Best News Ever.”