One of the most powerful abilities of cinema is to tell an audience a story, outside of their own time and place, and use it to say something meaningful about the world in which that audience lives. When a movie is directed by Steven Spielberg and stars Tom Hanks and Meryl Streep; you know it’s going to be one of those movies. While The Post never directly makes the claim in any way, it is without question meant to draw parallels between President Nixon and Trump’s attempts to control the media during their presidencies (Spielberg has stated that was his intended purpose for the film). For that reason movie goers, depending on their political leanings, are likely to either enjoy or criticize this movie.

The movie takes place in 1971 and follows Kay Graham (Streep) and Ben Bradlee (Hanks), the publisher and editor of The Washington Post as they seek to put the paper in the same league as the more established New York Times. Bradlee and his team realize that their best chance at this arrives when a confidential pentagon report is discovered, detailing how the government lied to the public about the Vietnam War over the span of 4 presidencies. 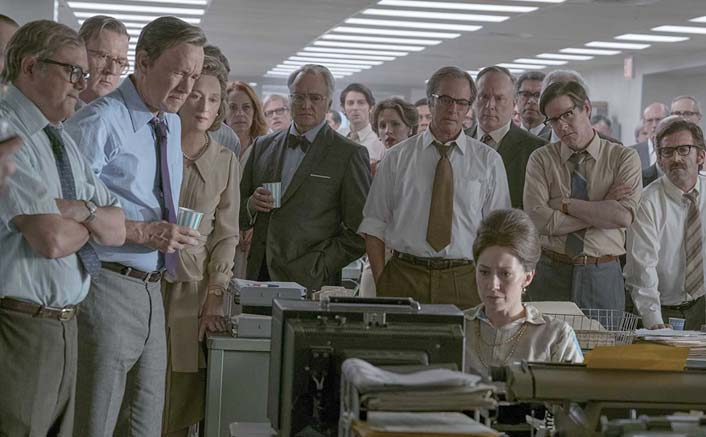 The cast is fantastic. Tom Hanks and Meryl Streep deliver exceptional performances as always. Streep does an excellent job showing Graham’s journey from an unsure widow who inherited a newspaper from her late husband, to confident publisher who refuses to let anyone tell her it is a job better left to a man. Bob Odenkirk, known for playing Saul in Breaking Bad, has a performance that deserves more recognition. His dry humor creates several great moments during the film.

Period pieces are always fun to watch. When done well, they are not only entertaining to see the differences of what that time period looked like, but also fascinating to think about the attention to detail the studio went through to make the world feel authentic. Everything from clothes, everyday household items, cars, to items in the newsroom. The Post seems to have nailed everything, creating a convincing depiction of the 70’s.

The Post is an award-winning movie for sure, and is an intriguing look at the newspaper industry during one of the most controversial presidencies in US history. You can be the judge on whether or not the parallels between Nixon and Trump are justified , however regardless of that element, it’s still a stand out movie that is more than worth watching.

The Post receives a score of 9 Pulitzer Prizes out of 10.