Fueled by his restored faith in humanity and inspired by Superman’s selfless act, Bruce Wayne enlists the help of his newfound ally, Diana Prince, to face an even greater enemy.

Justice League is now out, and while it does have a few issues, including a rushed story, those issues don’t prevent the movie from being a fun and enjoyable superhero flick. It also does a good job of injecting humor without harming the overall gravity of the story.

While I seem to be in the minority with this opinion, that was Thor: Ragnarock’s biggest weakness: it force-fed so much slap stick comedy that all of the darker elements of the story lost their weight. I was worried that Justice League would try to do the same thing in order to mimic the current trend in Marvel movies and it is a relief they did not.

The Critics got it wrong

Critics are currently having a grand time bashing the movie. Many have been quick to point out how low the Rotten Tomatoes critc score is sitting. However, one thing that is being conveniently overlooked is the audience score:

While these numbers are only valid to a certain extent, it shows that overall, movie goers are enjoying the movie, which is a huge win for the DCEU. The audience score for BvS is only 63%. Hopefully, ticket sales will hit close enough to the mark to keep the franchise moving along, as Justice League shows us that there are some great things in store for the DCEU. Right now its on track to hit well below expectations for opening weekend. It will be interesting to see how the movie performs over the next few weeks as more people see the movie and word of mouth, good or bad, spreads. Regardless of how you feel after watching, this is a historic movie that sees DC’s greatest champions come together for the first time on screen.

The story is fairly simple (which isn’t a bad thing): Steppenwolf, one of the New Gods, has come to Earth looking to do something evil. Batman get’s wind of his arrival and realizes he needs to assemble a team to stop him. That’s pretty much it. However, in the studio’s frantic effort to do things differently than the last movie, they hinder Justice League with abridged storytelling to fit a pre-set runtime. The film would have benefitted from more explanation of Steppenwolf: his background, and what his motivations are. We get what we have to have for the story at hand, but unless you’ve read the comics, some of the gravity is lost. More on the movie’s weaknesses in a bit.

It is interesting to note that Justice League essentially has two directors: Zach Snyder worked on the majority of the film and then Joss Whedon was brought in to wrap up the film after the tragic death of Snyder’s daughter. Whedon was even given a credit as a writer for the movie. Ironically, Whedon is the director behind the first two Avengers movies, as well as creator of popular shows including Buffy and Firefly. Many feared that Justice League could feel like two different movies, because of this: Whedon usually being much lighter in his tone than Snyder is. However, this is not the case. Aside from a few scenes that feel like there’s probably an extended version that was cut, everything flows well and the comedic moments that were added, fit. 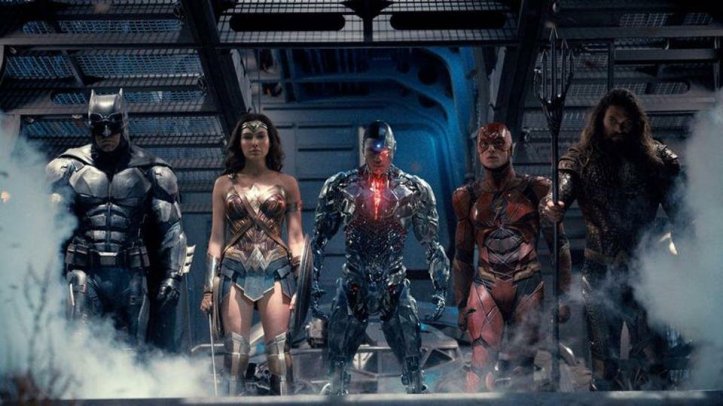 The heroes all meshed and played well off of each other, bringing different personalities to the team. There isn’t much to say about Gal Gadot, other than she continues to shine as Wonder Woman. She is without a doubt one of the best things going for the DCEU right now.

Jason Momoa as Aquaman was a fantastic choice. My wife thinks Momoa without a shirt for most of the movie was also a fantastic choice. He does a great job of finally making the character interesting. It would have been nice to know more about his background and personality going into Justice League. This is the overarching feeling the movie leaves you with: wishing there was more.

There’s a lot of talk right now on whether Ben Affleck will be sticking around as Batman. Hopefully, he will, as this is one of the best takes on the character we have seen in a movie. Whenever he moves or fights as Batman it’s like watching the comics in motion. I said it in my BVS review, but it’s clear Zach Snyder understands this character; I would even guess Batman is his favorite. He nails it again here, plus Bruce is back to his rule of no killing…people. Aliens are a different matter.

Ezra Miller is getting rave reviews as Barry Allen/ Flash. He is very funny, and some of the most entertaining moments of the film are when he’s using his super speed. However, I’m still not sold on him overall yet. He is a much younger, inexperienced version of Barry, and is very immature and socially awkward. It was difficult to believe that this Barry is intelligent enough to make his suit or work as a CSI forensic scientist. It’s also hard not to compare him to the CW’s television Barry, Grant Gustin. This Flash does have some great moments, including some screen time with is dad, so maybe Ezra will grow on me after his solo movie.

Ray Fisher was a solid choice for Cyborg, however his character suffers the most from a rushed introduction. The movie hits all of the essential points, but his own solo movie would have been a great way to introduce the least familiar League member to viewers. It was also surprising how bad Cyborg’s CGI is in places. For the most part it’s passable, but there are one or two scenes that make you focus a little too much on how fake it looks.

Spoiler alert, but not really because you already knew it was coming: Superman returns! I wont spoil how that does happen, but it fits in well with the overall DCEU. Henry Cavill is really hitting his stride as Superman. Overall, this is the hope-filled and inspiring Man of Steel that most people have been waiting to see. There are a couple shots of his face that may look…weird as you watch the movie. If you haven’t heard, that is because when Justice League was sent back to do some reshoots, Henry had already started working on his next movie, Mission Impossible, in which his character has a mustache. Paramount Studios refused to let him shave it for the reshoots, so Warner Bros was forced to hide it with CGI. It’s funny to look for once you know about it, but it doesn’t ruin the movie.

For the list of supporting characters: Jeremy Irons is still great as Alfred and J. K. Simmons as Commissioner Gordon is a good fit. I’m ready to see more of Gordon in the solo Batman movie. Amy Adams and Diane Lane are fine, they just aren’t really given time to do anything except be there.

So much backstory, so little time

There are a few external factors that contributed to the movie feeling rushed in places. All of it stems from the long list of behind the scenes drama with studio executives during the production process. Among other things, Warner Bros imposed a runtime restriction on the film in an effort to prevent one of the complaints with BVS from being repeated: that it was too long. However, this was a poor decision as the root of the issue wasn’t the runtime itself, but how much was forced into that runtime. Justice League’s story has the right amount of complexity to it, it just needs to be fleshed out more. A longer runtime would have allowed for this. Hopefully there will be an extended cut of the film released on Blu-ray, as even another 30 mins of well executed plot and character elaboration would improve the film dramatically.

Another decision made that hindered the movie was at the very start of the DCEU. In order to play catch up with Marvel, DC and Warner Bros decided to release only a limited number of solo movies before jumping ahead to the “all in” Justice League movie. One of those movies, Suicide Squad, didn’t even add something substantial to the overall foundation of the universe. This was a mistake Justice League is paying for now as precious amounts of the restricted screen time had to be used to introduce heroes that we haven’t seen before in the DCEU. This abridged story telling does what it needs to but could have been much more meaningful elsewhere. It doesn’t matter if it would be copying Marvel, but a solo Flash and Aquaman movie before Justice League could have added some lead up to Steppenwolf and even Darkseid to lay some foundation ahead of time.

8 super-mustache cover ups out of 10

Overall, Justice League is far from perfect, but is a good movie that is well worth your time. Its biggest issue is that you will leave wishing there had been more. Make sure you stay through the credits as well, as there are two scenes and one in particular that will have you even more excited for the future of the DCEU.

Let me know what you thought after you see it!