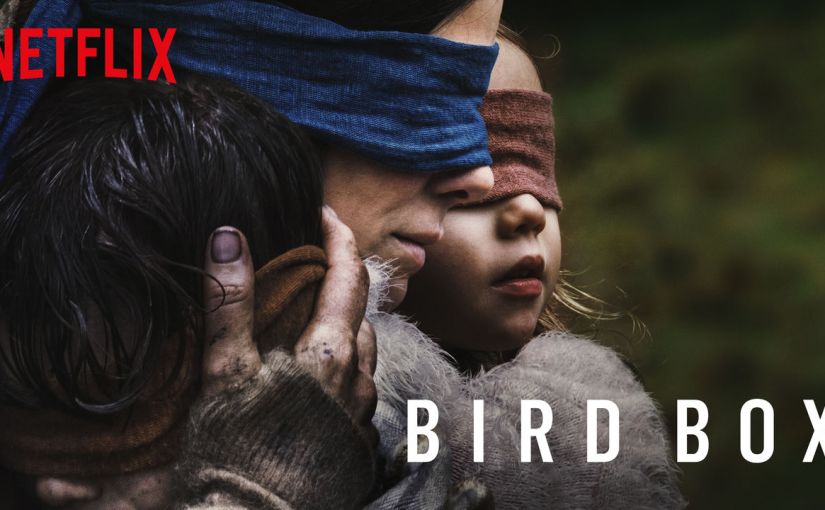 Based on the novel by Josh Malerman

Netflix’s latest thriller/horror movie, Bird Box has gotten a lot of attention over the last week. Most likely if you haven’t seen it yourself, you’ve at least heard something about it. According to Netflix’s twitter page, the film has been watched by over 45 million user accounts in the first 7 days of its release.

The film has also sparked a fury of viral social media memes, the most infamous dubbed the “bird box lady.” Apparently there are a number of younger viewers who do not know who Sandra Bullock is and have referred to her as the “bird box lady.” Naturally this angered many people and has even caused websites to post hilarious articles educating the uniformed on Bullock’s true star power.

Bird Box is set in a post apocalyptic world where unknown creatures have taken control of the planet with the ability to cause anyone who looks at them to see their worst fear and then immediately commit suicide. The name of the movie comes from the characters discovering that birds become agitated when the creatures are near, so they keep them nearby to act as an early warning system. It is never fully explained how this works or what the exact nature of the creatures are: aliens, demons, etc, but all of that doesn’t really matter.

Like many of these types of stories, the emphasis is less about the creatures themselves and more about the various character studies. The movie explores several meaningful themes such as: the definition of motherhood, the extremes a mother will go through to ensure her children’s survival, as well as how various individuals react to extreme life or death situations.

Bird Box’s similarities to other films hinders it from hitting its mark.

I love when movies have those extra layers of depth to their story; it makes for interesting discussions and often times allows filmmakers to take a familiar genre and give us an unfamiliar angle that feels new. However, while Bird Box is a captivating movie in its own right, it fails to reach anywhere near groundbreaking. The The story immediately reminded me of a cinema “cocktail” of various movie plots, a spoonful of The Happening, a dash of The Road. At one point I was even reminded of a particular season of The Walking Dead. However the most glaring similarities can be made to the 2018 John Krasinki film A Quiet Place.

To be fair, it is important to know that Bird Box is based on the 2014 novel of the same name and therefore actually predates 2018’s A Quiet Place, which to my knowledge only exists in movie form. I would be willing to bet that after the success of Krasinki’s movie, Netflix as well as other studios have been on the lookout for similar stories to adapt into their own films.

Having similar themes isn’t necessarily a bad thing as movies today are almost always a variation of something that’s already come before. The problem here is that Bird Box is too similar and not executed as well.

Both Bird Box and A Quiet Place are about invading creatures who’s primary strategy for human extinction involves essentially taking away one of our senses. Both movies use their end of the world narrative to say something about the importance of family. The difference is despite Sandra Bullock’s outstanding performance with Bird Box, especially in the last act, A Quiet Place had more of an emotional impact for me. I do think it’s possible that A Quiet Place resonated more with me as a man as it focuses more on a father whereas Bird Box focuses on a mother. I did see some of my friends who are moms post on social media that Bird Box struck them for that very reason. However I still feel that with A Quiet Place, the cinematography, the use of the creatures, how the family adapts, as well as the overall emotional narrative is just better executed.

I think what will ultimately be the line in the sand as to how much you enjoy this movie is what you’ve seen or read first. If you haven’t seen any of the previous mentioned films, Bird Box will probably blow your mind and you won’t understand why there is anyone who doesn’t think it was superb. However, if you have seen the others (especially A Quiet Place) then you’ll most likely feel as I did: less like you’re treading through unexplored territory and something more similar to a well traveled path. Maybe that isn’t fair but it’s inevitable; there are too many similarities with films that have come before it.

I’m curious to know how in depth the book goes, because another problem I had is the film changes the creatures’ tactics halfway through, but never explains why. The creatures don’t have any type of physical form. They can’t go inside or seem to be able to physically hurt people themselves. Without spoiling, there are some individuals you meet halfway through the movie, and you never get anything more than these people exist and are roaming around. It just ends up feeling forced and that their only purpose is to create some type of physical danger to motivate the characters to leave the house in order to drive the story on to its conclusion.

Sandra Bullock is without a doubt the best thing about Bird Box. If this film had someone else in the role I don’t think it would have gained as much popularity as it has. You rarely see her in these types of thrillers that border on horror and it’s a shame because she’s excellent in them. She’s excellent in everything, honestly. Her best moments here revolve around her interactions with the children and the arc she has during their river trip as she thinks back on past events.

The rest of the cast is also a higher caliber than I would expect for a Netflix movie with some bigger names attached including Sarah Paulson, John Malcovich and B.D. Wong. The performances were overall great, but individuals do make the typical horror movie mistakes and I found myself saying out loud repeatedly: “You should have listened to John Malcovich!”

Even though I bashed the story earlier compared to A Quiet Place, by itself it’s still an entertaining movie and I enjoyed the way it was told through the two different timelines: the start of the “invasion” being told through flashbacks while the present shows Bullock and her two kids floating down a river blind folded. Their background and where they are trying to get to is slowly revealed through the flashbacks. From what I understand, this is how the book reads as well.

Bird Box is carried by the talent of Sandra Bullock and is a decent movie. I wish it could be enjoyed in a bubble, however due to previous films it is hindered by feeling almost entirely unoriginal. The bottom line is if you haven’t seen movies like The Happening or A Quiet Place, you will love Bird Box. If you have then you can still enjoy it but the novelty of the plot won’t work as well as the movie wants it to. I’m glad I watched it, but I’m also glad I didn’t pay for tickets to see this in a theater. I would not have felt like I got my money’s worth. Netflix is the perfect place for this movie to live and is worth a view.

Cinematic Quality: 3 out of 5

Worth watching on Netflix: 4 out of 5 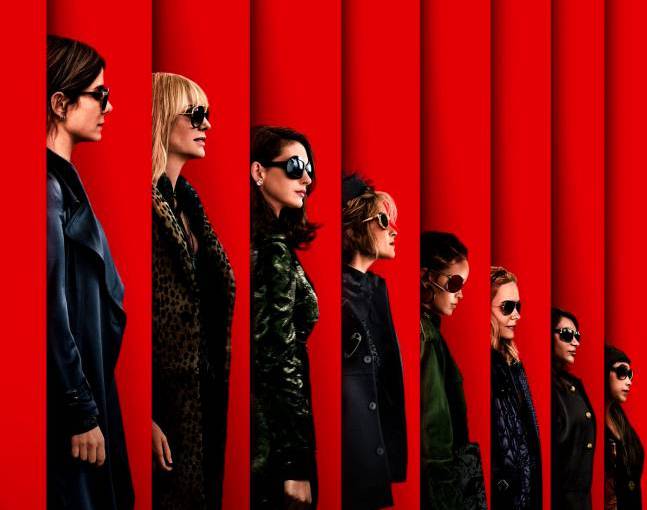 There’s a push in Hollywood currently, rightfully so, to make more movies with strong female leads. One of their methods is to take popular franchises with an all-male leading cast and rebooting it with the roles reversed. Ocean’s 8, obviously falls into that category as an all-female reboot of 2001’s: Ocean’s 11 (which is a reboot as well).

2016’s Ghostbusters: Answer The Call was the last attempt at role reversal, and it didn’t work out well at all. I liked Ghostbusters more than most, but still feel that it feel short. Because of that movie’s flop, Ocean’s 8 will automatically start out with a handicap with movie goers, and will have an uphill battle out of the gate. Take a look at the new trailer and then I’ll give you some of my thoughts:

This trailer actually looks really good. Also a lot of the cast: Sandra Bullock, Cate Blanchett, Helena Bonham Carter, Anne Hathaway…are all solid choices. Even Rhianna was a smart casting choice. While she may not have proven yet to be that great of an actress, she will definitely drive many to go see it with her star power alone. Mindy Kaling is usually funny on TV, hopefully she’ll do well in a movie like this.

Also, judging from the trailer, it looks like this movie is correcting a mistake that hurt Ghostbusters severely: keeping the movie in the same universe as the original. With Bullock playing Danny Ocean’s sister, it makes this movie not so much a straight reboot as it is a continuation of the franchise from the point of view of a different set of characters. I can see Bullock saying something like, “Danny had a crew, and that went well. I’m going to put together a crew of my own.” Boom. It all makes sense. You make the fans of the original happy and the new cast is free to do their own thing. This will definitely help make the movie feel more authentic as well, as now characters can make references to past movies or if the studio is really smart, we could even see cameos from the original cast.

One more thing that might be a bit of a spoiler: if you watch the trailer near the end without blinking, you can see Bullock sitting in front of a tombstone that appears to have the name “Danny Ocean” on in. Is Danny really dead…or is that just what he wants people to think?

I definitely think this movie deserves a chance. The first trailer is well done and seems interesting; more-over, they’re not completely negating the past 3 movies to make this one. I’m excited to see more. Let me know what you think!