Check out the trailer

One of the most common negatives against 2015’s Jurassic World was that it felt too much like a rehash of the original Jurassic Park. While that is true to some degree, it was also part of its charm: being able to see the park open and running as John Hammond had originally envisioned. Of course, the dinosaurs still broke out and ate people, because as Dr. Malcolm so eloquently put it, “Life…ah…finds a way.” Regardless, if similarity to previous films was what turned you off of the last movie, prepare for more of the same with the sequel…at least until about the half way point of the film. (Actually a couple moments in the 2nd half feel familiar also.)

Jurassic World: Fallen Kingdom almost feels like two short films rolled into one. The 1st half is much more of a blockbuster action movie and is essentially what you’ve seen in the trailers. A volcano on Isla Nublar is going to erupt, and the world is debating over whether or not to save the dinosaurs. Claire (Bryce Dallas Howard) who now runs a “save the dinos” foundation, convinces Owen (Chris Pratt) to join the team heading to the island after telling him one of his trained velociraptors from the last movie is still alive. This first part does have some noticeable similarities to the second movie in the franchise; The Lost World:

There’s a few others, but I won’t mention them to avoid spoilers.

Then, halfway through, something is revealed that makes the movie switch gears dramatically. The rest of the story takes place off the island and feels much more slower paced; turning into a close quarters monster movie. This means that the movie’s biggest action set piece happens in the middle of the movie…which depending on what you were hoping for with this movie, may make the ending feel a bit anticlimactic.

Whether you enjoy the film or not, it’s actually refreshing to watch a movie’s plot unfold that wasn’t totally spoiled by it’s trailer. That seems to be a rare thing for movies today. Despite having some minor things I didn’t like, I left the movie genuinely entertained and excited to see where the next one goes (of course there will be a next one). I was expecting this just to be another run through the park, however Fallen Kingdom goes in a direction that hasn’t been fully explored in a Jurassic Park/World movie before.

This feels like a transition movie for the franchise, as the studio is undoubtedly looking for a way to make more movies without continuing to retell the same type of story we’ve seen several times already. You can make the argument that they should just stop making movies, but since that obviously isn’t going to happen at least they’re taking a chance on doing something creatively different. However, no matter how different the next movie is, at its core this franchise will always be about prehistoric monsters trying to hunt down and eat modern day humans. I’m always a sucker for more of that.

We do also get a little more back story into how John Hammond and company came up with the idea to bring dinosaurs to life. I’m not sure if it was entirely necessary, and may even add an element to the story that over complicates things.

On a side note, maybe it was just the theater I was in but the score seemed very loud and chaotic at times…almost to the point where it threatened to drown out what was going on in the scene.

Oh no…parts of Solo: A Star Wars Story were too dark and this movie is too loud. It’s happened…I’ve gotten old.

As far as the music, it would have also been nice to hear more of the familiar sections of the Jurassic Park music at times. They did a decent job of this with the last movie. Given how the movie ends, I can understand why they are maybe starting to move away from that, but at least try to make the new music more memorable.

Chris Pratt and Bryce Dallas Howard are back to reprise their characters. Owen is essentially unchanged from the last movie, however Claire has evolved from thinking about the dinosaurs purely as “business assets” to becoming a full fledged dino activist. There’s even a fictional but well made website that was created for the movie. Studios use to create fake, promotional websites like this a lot more than they do now. In this age where kids have smart phones and tablets, I think it would be beneficial to create them more often and really advertise it. If done well they are fun to navigate and can help add a little more back story to the movie without taking up more screen time.

Claire and Owen are accompanied by two supporting characters, played by Daniella Pineda and Justice Smith. Both help to add more humor to the movie, but also end up being as stereotypical as they are unnecessary. Take them out of the movie, and it wouldn’t have mattered. They just could have been written better. 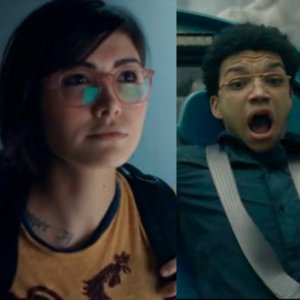 Everyone else gave fairly standard performances for the genre. You should watch these movies for some light entertainment, not to witness Oscar worthy performances. Characters are as predictable as you would expect: bad guys take part in bad guy shenanigans, and dumb people make ridiculously stupid decisions that allow the dinos to eat people.

There’s a couple cool cameo’s from the original. Jeff Goldblum’s Dr. Malcolm remains the smartest guy in the movie, even only having about a minute long cameo where he warns everyone how dumb going back to the island is. I also still really enjoy the nostalgia factor of bringing back the character Henry Wu, played by BD Wong. He had such a small role in the original Jurassic Park movie. Now, after two movies, Owen and Claire still have no idea who he is, and yet he’s the real mastermind working behind the scenes. If the studio is smart, he’ll continue to have a role to play in future movies.

Worth the price of admission: 2 out of 5